The 2013 debut of MSC Preziosa moved the family-owned Italian company MSC Cruises up another notch to become the world's third-largest cruise company. That's no mean achievement, given its modest entry into the cruise industry with a second-hand vessel in the late 1980's. The 12th ship in the fleet -- and the fourth in MSC's flagship Fantasia Class -- Preziosa is making its mark with all-new facilities that include the longest single-rider body waterslide on the waves, a children's aqua park, an expanded shopping mall and the first two Eataly restaurants at sea. And, it's all coupled with the company's distinctive Mediterranean atmosphere.

However, for families, younger couples and the young-at-heart, the ship provides a fun, relaxed and affordable way to cruise the Med. With 1,751 cabins and a total capacity for 4,345 passengers -- a figure that's more than double occupancy if parents bunk up with their children -- Preziosa offers a good choice of accommodation options for everyone from budget-conscious families to couples who want to splurge with a stay in the exclusive Yacht Club.

It's important to note that, while English is the main onboard language, MSC predominantly attracts passengers from mainland Europe. This means announcements are made in five languages, and entertainment is geared to appeal to multinational audiences, so you will find dancers, bilingual singers and acrobats instead of comedians and similar acts that require a lot of speaking.

Of the 1,751 cabins, nearly 65 percent (1,106) have balconies, offering a good standard of privacy with high dividing screens. The cabins are divided into nine categories, ranging from 392 inside cabins to 113 oceanview cabins with portholes and 97 suites in different sizes and price grades.

A standout feature is the Yacht Club, an exclusive "ship within a ship" that offers 69 cabins, a 24-hour concierge, butler service, a private dining room, bar, lounge, sun deck and pool -- albeit a small one -- and separate elevator to the spa.

All cabins have bathrooms with showers -- plus bathtubs in the Royal, Executive & Family and Deluxe Suites -- and are decorated in a light, contemporary style. There are fixed, non-branded bottles of shower gel and shampoo (no conditioner) in the walk-in shower cubicle, which has a door rather than a curtain, and fixed liquid soap dispenser by the sink. Although there are soap dishes, bar soap is not provided.

There was plenty of storage space in our balcony cabin, but the plastic coat hangers were flimsy, and we broke two just trying to hang up clothes. Some passengers might also find the floor-to-ceiling mirror at the foot of the bed, and as wide as the bed, slightly disconcerting. In standard cabins, you don't get extras like chocolates and hors d'oeuvres that are associated with more expensive suites. However, bathrobes are provided, and the choice of soft, firm, down or synthetic pillow fillings is a nice touch. All cabins include digital TV's, safes, Wi-Fi and for-fee mini-bars.

With nine dining venues, including a buffet that's open nonstop for 20 hours a day from 6 a.m. to 2 a.m., passengers won't go hungry. The main restaurants are the two-deck Golden Lobster on Decks 5 and 6, with seating for 1,155, and the panoramic 766-seat L'Arabesque, aft on Deck 6. Both operate two dinner seatings and offer identical menus.

Breakfast and lunch are served in the ship's main restaurants and self-serve buffet restaurants, the adjoining Inca and Maya on Deck 14, which offer all-day dining and the option of a more casual setting for dinner. Continental breakfast from room service is delivered free to cabins on request, but there is a charge of €3 ($4) for one dish and €5 ($6.50) for two from the main room-service menu that's available around the clock. In-cabin pizza delivery is also on offer for €7 ($9), which includes a drink.

We ate breakfast and lunch in the buffet, which offers a good spread of mainly Mediterranean and fast-food fare, such as pasta, pizza, hot dogs, hamburgers and sandwiches, with a salad bar and smaller stations for ethnic dishes, including curries. Dinner in L'Arabesque, which can be a five- or six-course affair, depending on how many dishes you choose, was rather disappointing. While adequate, the food was not particularly fancy in terms of presentation. Courses seemed rushed, and the wine service was rather haphazard, with waitstaff acknowledging empty glasses but not returning to replenish for some time, if at all. In fairness, this could have been down to teething problems on a new ship with new staff at the start of the season, but there was definitely room for improvement.

Similarly, in the buffet restaurant, there was a feeling the team hadn't really gelled. Some staff couldn't have been more helpful, while others barely made eye contact, let alone smiled.

We didn't get to sample Eataly, an alternative venue that debuted on Preziosa. MSC has teamed up with the Turin-based chain that champions gourmet Italian food and the leisurely "slow food" movement, which encourages leisurely dining, to open the first two Eataly restaurants at sea. Situated on Deck 7, the minimalist 115-seat Eataly and sophisticated evening-only Ristorante Italia offer a la carte dining, where you pay for every item you order, as opposed to the alternative dining surcharge levied by other cruise lines.

Although the ship's surroundings and decor are glitzy and glamorous, Preziosa has a relaxed atmosphere, and passengers can leave the ball gowns and tiaras at home. There are typically two formal nights each week, where men are encouraged to wear tuxedos, dinner jackets or lounge suits, with evening or cocktail dress for the ladies. That said, many people ignored this on our formal evening, and we got the impression that passengers don't feel as governed by the dress code rules as they do on ships that attract a generally older crowd. Informal nights request a jacket and tie for men and a dress or dress pants for ladies -- no jeans. For casual nights, just about anything goes (aside from shorts, which are only allowed in the self-serve buffet restaurant). Daywear is casual, and the daily newsletter advises of the dress code options for each evening.

During the day, there are shore excursions and onboard activities. During our stay, these included dance classes, a ten-pin bowling tournament and an ice-carving class. Don't expect any in-depth cultural lectures, as the accent is more on fun than on information.

By night, party animals have many choices. This is not a ship where the majority of passengers are tucked up in bed well before midnight. The main entertainment venue is the 1,600-seat two-story Platinum Theatre on Decks 6 and 7. The emphasis is on visual shows that will appeal to an international audience, and we watched a colorful take on "Alice in Wonderland" with fantastic Cirque du Soleil-style acrobats.

There are 20 bars, including the new Diamond Bar that's one of the quieter venues and two outside pool bars. Others include the Green Sax jazz bar, chic El Dorado piano bar and the large Safari Lounge that hosts smaller shows and has a dance floor. Night owls can dance into the wee hours in the Galaxy Lounge disco or see if lady luck smiles in the large casino, with slots and gaming tables. The casino is one of the areas on the ship where smoking is allowed, which can come as a bit of an unpleasant surprise to nonsmokers used to ships where smoking is banned in public areas.

With youngsters younger than 18 travelling free if they share a cabin with two full-paying adults, and special rates for children accompanied by one adult in the same cabin, it's no surprise MSC is popular with families. Preziosa offers great facilities for children, including the all-new Doremi (clever name -- say it like the musical scales, do re mi) water playground on Deck 16. With features like sprays, fountains, water pistols and a "drenching bucket" that fills up drip by drip before raining down on unsuspecting heads, it will keep splash-happy children amused for hours.

Above Doremi on Deck 18 is one of the ship's standout features -- the 394-foot-long Vertigo waterslide, billed as the longest single-rider body waterslide on the waves. The slide is 42 feet high and takes thrill-seekers on a twisting descent that includes a 30-foot transparent stretch over the side of the ship. Note: Children shorter than 47 inches are not permitted on the slide, and there is a maximum weight restriction of 330 pounds.

The indoor pirate-themed Doremiland children's area on Deck 15 is home to the Mini and Junior clubs, for children ages 3 to 6 and 7 to 11, respectively. The clubs offer free daily entertainment conducted in different languages, according to the nationalities of youngsters. Doremiland remains open in ports of call to provide supervised activities for children whose parents have booked shore excursions. Parents should be aware that Preziosa does not offer a baby-sitting service.

Children younger than 3 can join Babytime, with an accompanying adult, for two-hour sessions every morning, afternoon and evening. For older children, the Y-Team caters to ages 12 to 14 and the Teens Club to 15 to 17. Facilities include the dedicated teen disco, Graffiti's; a weekly themed party; and, new for 2013, the chance to take part in the weekly Flash Mob, impressing other passengers with a performance by the pool. Virtual World includes a video arcade, Formula 1 race car simulator and 4D cinema, all at extra cost.

Teens will feel very grown up with Teenage Kicks, a range of spa and makeup treatments, temporary stencil tattoos and hair services available in the spa. A prepaid Teen Card is also available, which doubles as a cabin key and offers under-18's the opportunity to buy items onboard. Available in €30 ($38) and €50 ($64) versions, it cannot be used to buy alcohol or tobacco, and any credit remaining at the end of the cruise is not reimbursed.

MSC's slogan is "the Mediterranean way of life," and this is definitely European-style cruising. In 2012, the line carried passengers from 180 different nationalities; Brits and Americans embarking in the Med, where Preziosa's homeport is based, will be in the minority. Most of the passengers are from mainland Europe, particularly Italy, and MSC attracts couples and families who are generally younger than cruisers on more traditional ships.

Occupying a prime spot forward on Deck 14 is the Aurea Spa, including a new thermal area with a sauna, steam and frigidarium ice room that's not featured on other Fantasia-class ships. The spa has 14 sea-facing treatment rooms and offers an extensive range of Balinese-inspired massages and beauty treatments that range from €8 ($10) for hair-straightening and facial-waxing to the Ultimate Deluxe Thermal Ritual, a four-hour session that adds up to an eye-watering €480 ($615) per person or €770 ($987) per couple.

The large, adjoining fitness center, with panoramic views over the bow, has Technogym running machines, cross-trainers and other aerobic equipment, as well as weight resistance equipment, free weights and an area in the main gym for spinning classes on stationary bikes. Some fitness classes, yoga sessions and personal training sessions incur extra fees.

Outside are a jogging track and two swimming pools, plus an indoor pool with a retractable glass roof. The largest of these pools is the Aqua Park pool on Deck 14, which has water jets and cascades. Scattered across the ship are 10 whirlpools. There's also a fourth pool exclusively available for Yacht Club passengers.

The onboard currency is the euro. A daily service charge is automatically added to shipboard accounts, based on the length of the cruise. For example, on a seven-night Mediterranean cruise, the daily amounts would be €7 ($9) per adult and €3.50 ($4.50) per child (age 14 and older); they're slightly less for longer cruises. No service charge is applied to children younger than 14. Passengers can ask for gratuities to be added at the time of booking and, conversely, if they are dissatisfied with the onboard service, they can ask for them to be removed by contacting the Guest Relations Manager. MSC does not recommend tipping individual members of staff. A 15 percent bar service charge is automatically added to all purchases. There is no additional service charge for spa treatments.

Casino & Spa Staff At your discretion 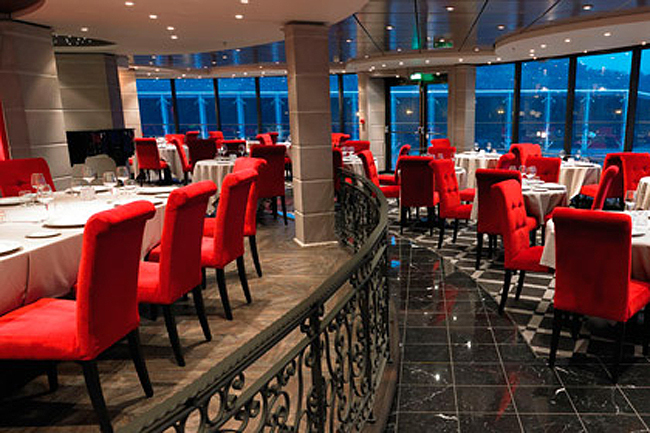 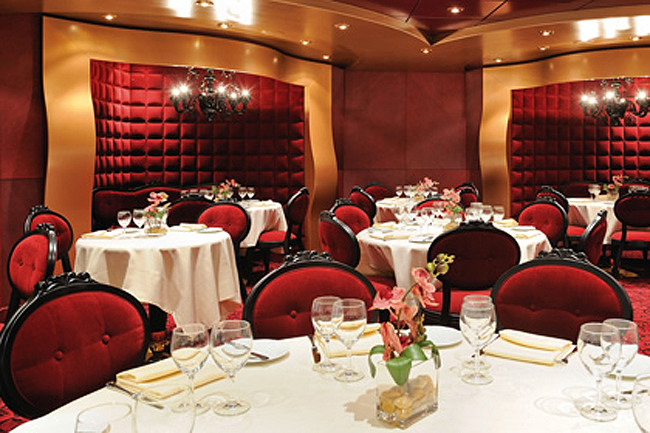 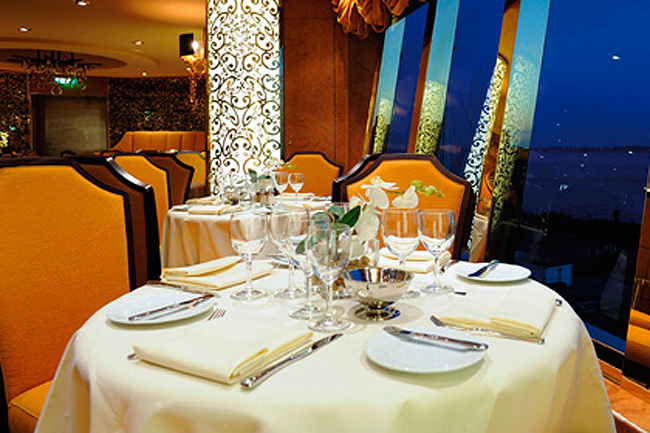 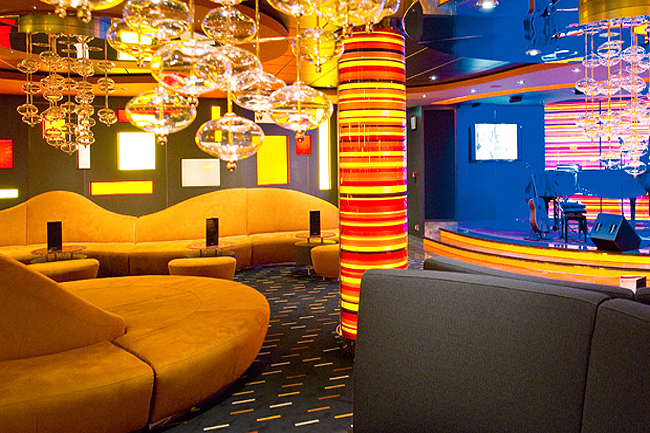 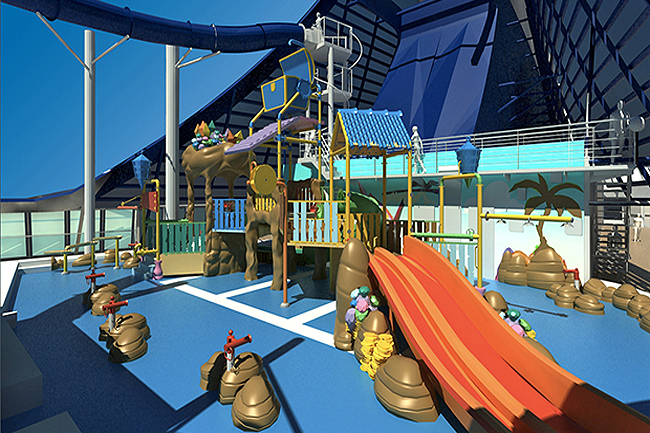 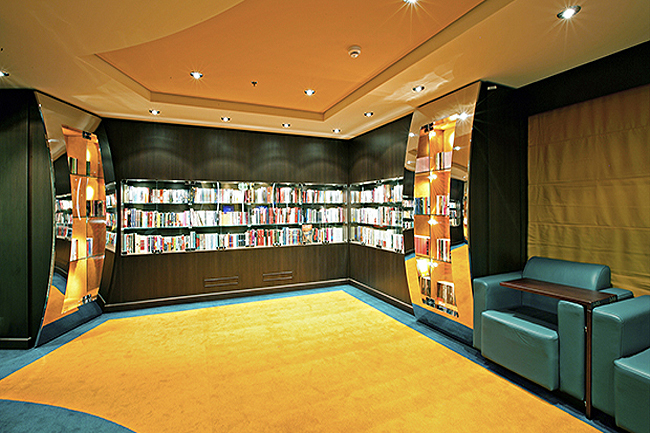 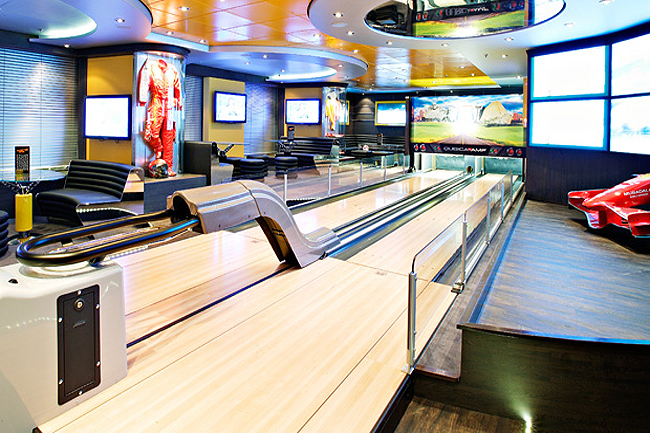 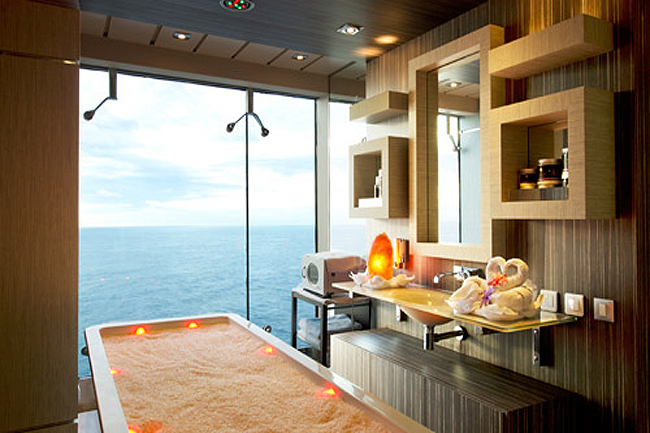 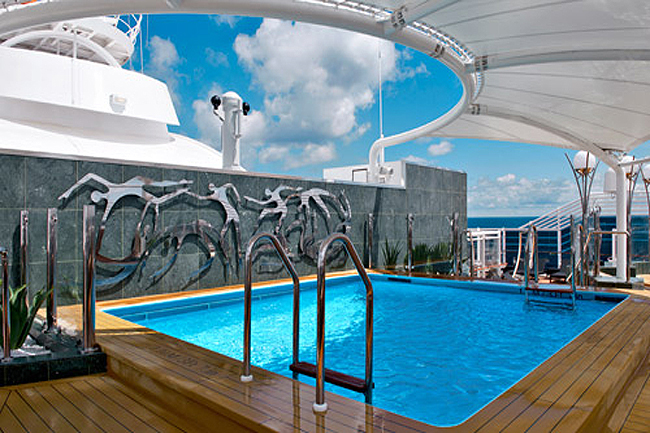